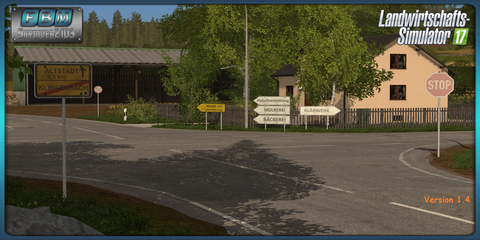 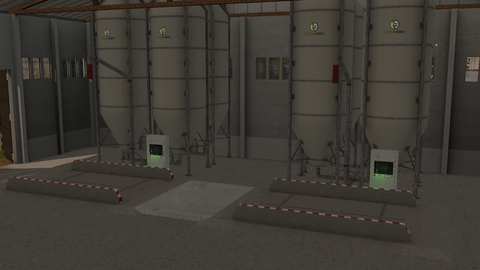 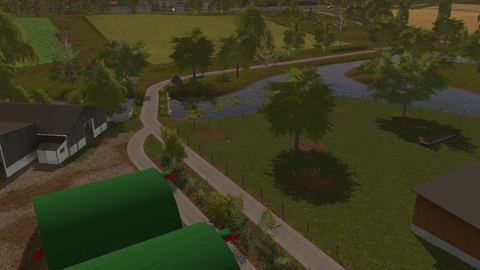 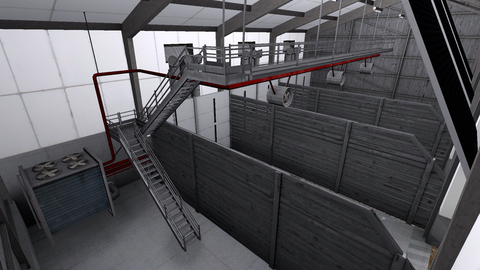 * Ground under the mountain hall at the court straightened (thanks to Oimel, reported that the shoveling did not work properly there)
* Field 5,16 u. 20 bumps eliminated
* Bakery – 2 more Schüttgoschen installed to unload all fruit individually (problem with the triggers)
* Bakery – roofing of Schüttgoschen and pallet dispensing
* Bakery – 3 additional pallet spawn points created at the bread issue
* PDA overview again standard (sales points are displayed normally again)
* Zuckerfabrik Palettenspawner fixed
* Meat production garbage bags removed on pallet spreader (did not produce)
* Tipcollis installed in the yard and at the sawmill in the halls
* Fixed pallet spurs on the sheep
* old shed at the yard, adapted terrain and installed TipColli
* StopMilkSale-Script removes there unnecessarily —> an entry in the UserAttributes is enough to stop the milk sales
* Trees and shrubs between fields removed (F13 & F14, F3, F4, F5)
* created own collisions for the shelters at the yard and at the BGA (Hall throws errors in the log when Ridge Body is created)
* Collis set in the fences everywhere on the map
* Fixed barriers at the entrances (partially moved when saving the map)
* Sewage plant liquid fertilizer production screwed back and compost slightly increased
* Palettenspawner of all productions realigned (finished pallets are always gespawnt front for better removal)
* Fence moved in residential building in the old town (street was very narrow there in the curve)
* Floor under the cowshed straightened (the shoveling in the dirt area worked only conditionally)
* SnowMask for Seasons adjusted again
* Wooden pallets sale price increased
* Eggs spawn points fixed (too far back and hard to reach)
* Milchfülltrigger in the cows fixed (hose was not exactly at the connection)
* !NEW! Dealer space enlarged to the rear, large vehicles and equipment are spawned behind
* !NEW! Position of the plants refined (wheat, barley, rape, ….) are more in rank and file
* !NEW! Maistextur exchanged and plants also realigned
* !NEW! Field paths at the entrance to the farm from field 1 & 2 and removed replaced by asphalted roads (better solution in the long term, I think)
* !NEW! Farm silo system installed in the large hall at the farm (storage for all crops, plus lime, compost and pig feed)
* !NEW! Grain storage hall at the yard removed and Durchfahrhalle installed with adjoining feed mixing hall
* !NEW! Libra moved backwards and replaced with the visually beautiful model
* !NEW! Traunsteinersilos removed and replaced with 1 outdoor silo
* !NEW! Shed replaced at the yard opposite the hall for another model
* !NEW! Own feed mixing hall with the heap system created by Giants (gabs so never in this way on a map)
* !NEW! Straw, grass and silage can be bought at the land trade (description on sign has been adjusted)

1. Unfortunately, due to time constraints, I did not succeed in adapting the compound food hall for the Seasons Mod,
because I have not found any suitable fillplanes for the hall that look good …
As an interim solution, I have made grass, straw and silage purchasable as a bulk material at the land trade,
So the Seasons players can start a savegame because of the changes
do not require a new savegame later;)

2. Unfortunately, I have not received an answer because of the server error, so this was not fixed …
I’ll look back there again …
to dissolve the recommended mod for bales in the compound feed store: