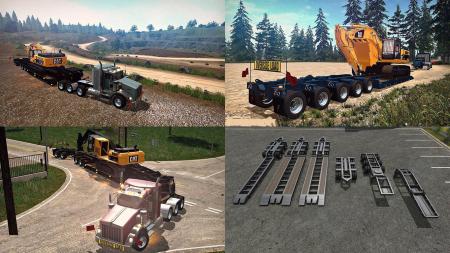 Description:
Well after many hard hours of scripting, raging at scripting, and figuring one thing out only to break another, we proudly present the heavy haul pack! This is a pack to complete all your on road needs! NOT AN OFF ROAD LOWBOY! Took me ages to script and many more trying to get it all to work together. All of these things on their own are simple. But we tried to do it all as one store item per part to reduce those pesky store icons. Glad to have finally finished this. This is one of the biggest and most complete lowboy packs in FS history.

And finally, words from Seriousmods:
After the release of the Pacesetter lowbed near the beginning of fs17, I decided that I wanted a more comprehensive lowboy configuration to realistically haul equipment in game. However, a lack of motivation on that project sent me in other directions, and to work on other things. When SCS released their ATS heavy haul pack, though, it created a new opportunity to build the ultimate heavy haul collection, which I feel we have done in this project.

With the parts contained in this pack, you could realistically haul just about anything that would ever see the highway. Whether you’re moving a backhoe across town, or a mining excavator across a map, this pack has it all.

And to put things in perspective, this project would never have occurred without the help and work of several people. Firstly, thanks to Zombidogz (Ridge Crest Modding) for converting the model to a useable format for me to bake and modify. Then, thanks to Kman and Johny9188 for scripting and adjusting each trailer part as well as the truck and testing them in single player and MP sessions.

Included in the pack is a T800W quad axle tractor pushing some 600 horsepower to the ground. It’s ready to tow the Fontaine Magnitude trailer, which is configurable as a beam, wide, or normal deck lowboy, and set up to connect to three jeeps, and four boosters. You also have the choice of pinning on additional axles to all but one of the boosters, or just directly to the trailer.

And to top things off, the truck and trailer are equipped with configurable oversize signs and flags, custom spec maps, and dynamic hoses.