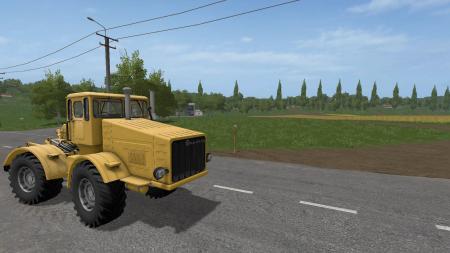 Description:
Pack tractors K-700 early series. Pak is a deep upgrade of the very first work in FS – the K-700 tractor’s “Humpbacked” envelope for the 17th part of the game, released on March 2, 2017. A year after that, work was begun on the complete restyling of these tractors. As the basis was chosen K-700A from SpinTires. The hood, interior and tank were made from scratch and textured in the Substance Painter. All other parts of the tractor were also textured anew. However, it was decided to assemble a small set of K-700 tractors of those times. Thus, there was a pilot model with an old cabin that passed state tests, an export version and an experimental development of the LHKI-LKZ, which included the installation of the GTD-350T engine on the K-700 tractor. All of the above modifications are real and were made from photographs and reliable data. All models of the pack have different configurations, such as bonnet design, radiator grilles, the number of operating light bulbs and the installation of wheel covers. All configurations were also created using real photos. Changes v1.0.0.1 [24.09.18]: – New sounds, added PTO socket, minor edits.