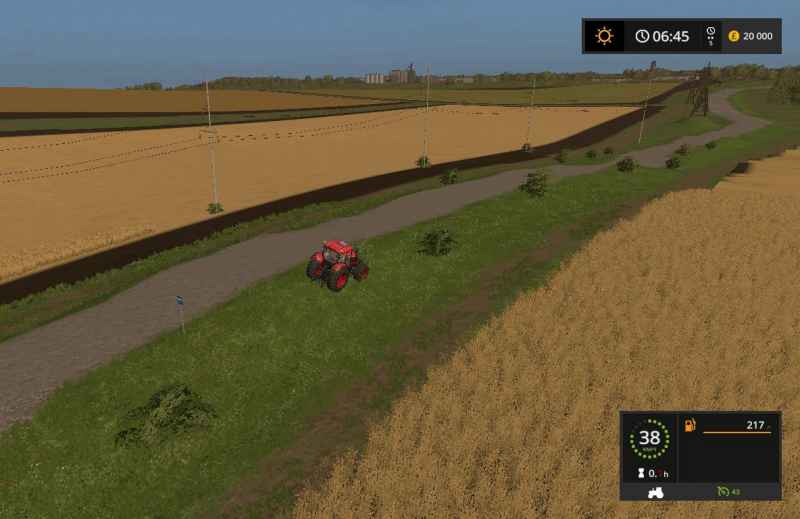 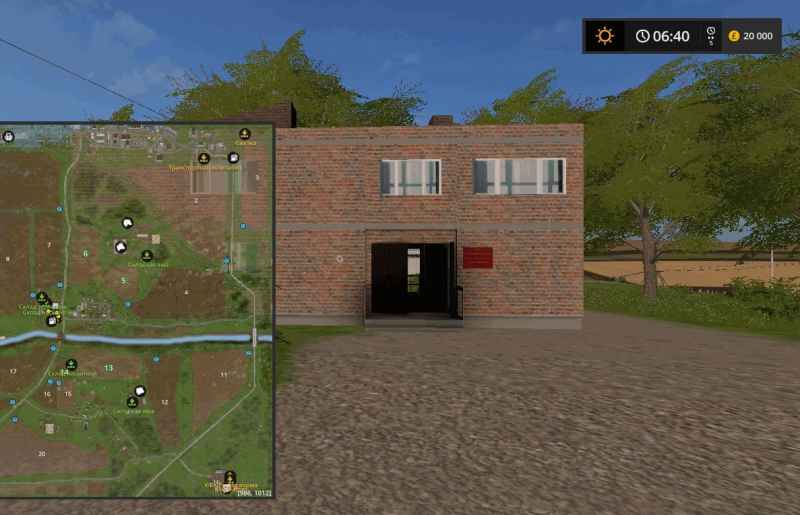 Description:
Changes in version 1.7.5:
1. the quarry was moved
2. Hud products were changed
3. was re-done railway traffic and relocation
4. More vegetation was added
5. Greenhouses were added
6. Chickens were transferred
7. New products were added
8. the traffic to Russian was changed
9. there is more traffic
10. New random events
11. Added Dynamic Sky
12. The economy in animals was corrected
13. the boundaries of the fields were corrected
14. corn textures were changed
15. was prescribed mask for fashion season
16. minor amendments to the registration in production
17. the terrain texture was changed
18. A solid liquid manure storage facility was added
19. Production of pig feed was added
20. added grass storage
21. the point of sale of the transport company
22. was added point of sale market
23. at the beginning of the game you are given two greenhouses, one of them is already full of resources

A large map.
3 fields in the property.
Cultures are standard.
Standard animals.
There are car and pedestrian traffic.
A good set of starting technology.
Static objects are sewn into the card.

CHANGES.
Prepared for fashion for seasons.
The card added all the functionality from the map of the gifts of the Caucasus.
3 new cultures.
The old version of the card must be deleted.
Map Mods Pack
Changes:
1 were added gardens of apples, pears
2 was added yogurt factory
3 was corrected realtor (now the purchase of fields and industries is displayed correctly)
4 extra functions were removed in the map menu settings
5 new sounds were added to the map
6 new scenery
7 fields have been changed: now there are only 12, but more in size!
and in detail in previous versions
1 was added charcoal
2 now the majority of industries work from fuel (coal)
3 fixes with pallets in production (now correctly appear in their place)
4 were added purchase houses (with mini manufactures)
5 new points of sale
6 added dirt
7 additional light was added
8 furniture factory moved to the city (sawmill remained in the old place)
9 the hand hitch was removed
10 now you can recruit water for free (where there are columns and in the lake where the fish farm)
11 in the quarry now more squeak and gravel
12 was corrected by railway
13 were corrected collisions
14 straw was fixed in pigs
15 has been changed spline water
16 the forest was changed
17 new garages in factories
18 the boundaries of the fields were corrected
19 added a task in the fields
20 postponed entry to the garden center
21 were corrected the trigger
22 fix on grain storage

Version 1.5:
1 the store was changed
2 production of fuel was added
3 were corrected the trigger gate
4 conveyors were made in animals
5 coins were corrected
6 minor fixes
7 added the sale of bran at the elevator (purchase for cows)
8 were corrected the trigger for coal mining
9 was completely redesigned elevator (point of sale)
10 the rented elevator was removed
11 the grass was changed
12 wood chips were added during deforestation
13 Now, when you exit the game, appear on the map in the same place as you were before you left. If you were at this point in technology, then you will appear beside her.
14 has been fixed the problem with the fashion season
15 the finished goods warehouse was converted

Version 1.6.3:
– The archive of the map is simplified
– Fixed minor bugs and not only
– Added molding shop.

Changes to v1.6.7:
– Many visual errors have been fixed;
– fashion seasons began to go more stable;
– added hay storage;
– the point of sale of straw hay was corrected;
– the railway crossing has been completed;
– the speed of the electric train is reduced;

It is recommended to start a new career!