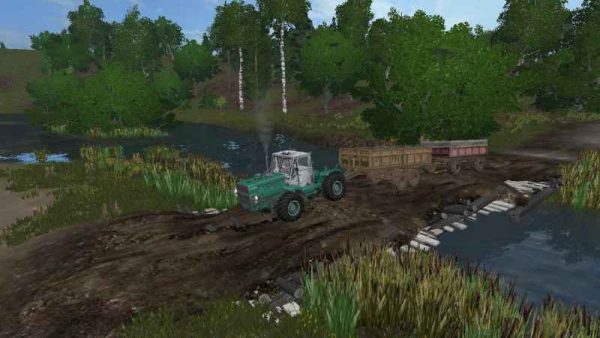 Description:
The card was made for a player with different tastes, who likes in the fields, who grows crops, whom to engage in forestry, to whom the livestock, to whom that construction, even birhmentship, buying cheaper by selling more expensive, who just to ride, or tired of doing one, you can always switch to another. So on the map you will find something to do. All the production processes are thought out and to some extent difficult, because I wanted to do more manual work, so that it would be more interesting. The difficult terrain of Siberia, a lot of roads that will present you their surprises. Changes in the map version 2.1: – Added new production lines: -BGA “SibBioGas” which will produce methane. – Beer factory “Siberian” which will produce beer. -Color which produces furniture. -Ribable Plant which produces fish, caviar and seafood. -The honeycomb produces honey. -Added the production of hops for BeerZavod. -Added Coal quarry with the ability to both mine and for a small fee loading from a rotary excavator. -Also added 2 more quarries with extraction of sand and gravel, total 6, on 2 of them there is a possibility of loading from the excavator for fuel. -Added 3 silos near large fields. They are suitable for the production of methane in BHA. -It is possible to breed chickens. – Added feed mixer for pigs. ——— Added new points of sale: -GAS for Ogur, I take methane. -Port on the Fish Factory, takes almost everything. -Port of fuel, takes methane, fuel, takes the tanker. -Magazine Fishery, accepts consumer goods for hard workers. -Base of recreation “Visiting Leshnoy” accepts consumer goods, fuel for the generator and methane in the bottles in the cafe. -Base recreation “Building” takes materials for the construction of a base and a sanatorium. -On villages there is an opportunity to sell gas in cylinders and coal. ———– Subject to change: -MyCoombine moved to another location and redone. It also takes chickens, coal and gas in cylinders. -The winery was moved to another place in its place now the SibMash purchase shop in Ogura. -Concrete plant moved and expanded. -The vineyards are moved. -The mill is now a flour mill “The Old Mill” and completely rebuilt. -The sugar factory is moved closer to the Red Key. -The old RybHoz was removed. – The storehouse of flour and bran is moved and rebuilt. Now it is in place of the Sugar Factory. -Perealized pallets (Visually). -Added ways of feeding animals (Growing herd, and dairy in cows). – Added random events. -Added new fields. -The economy is recalculated, it will become a little easier to develop (compare complexity). -The night lighting is done. -Added and changed the old traffic technology, now the technology can arbitrarily go to one side or the other (It was difficult taking into account the terrain). -Added new areas of deforestation. – Now we need coal to dry the grain. -Added compost to the BGA as a working off from manure and silage, which can be rented in the Garden Center. (Consider the possibility of exchanging humus for fertilizers). -The new equipment will be added, as long as it is GAZ for transportation of cylinders, and a semitrailer for transportation of methane. -Added various animations, traffic (Aircraft), effects, voice. -Realistic retekstur.