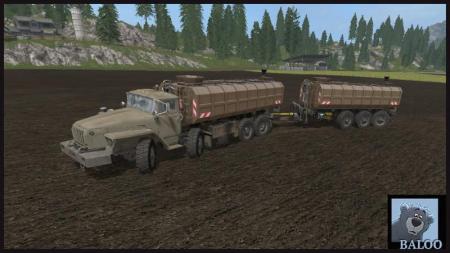 changed by me:
– drive shaft recording
– adapted colli
– driver position changed, arm no longer protrudes from the side window
– speed adjusted in the shop

here is my URAL 8×8 HKL for you, many will know him from the LS15,
only unfortunately he had no function there.
there are so many MAN and AMI TRUCKS with a hook lift, but I think only –
an OSSI-TRUCK (a KAMAZ), – so now my conversion, so that as well as –
old OSSI ^^ – now has a little more choice;)

There is nothing more, just have fun with it!
on this way, thanks a lot to FRANZ, for his video and the test.
… and model-safe for his tutorial-video and exhaust-smoke script.
(test video from FRANZ was linked, the ural was revised, see screens)
well then !